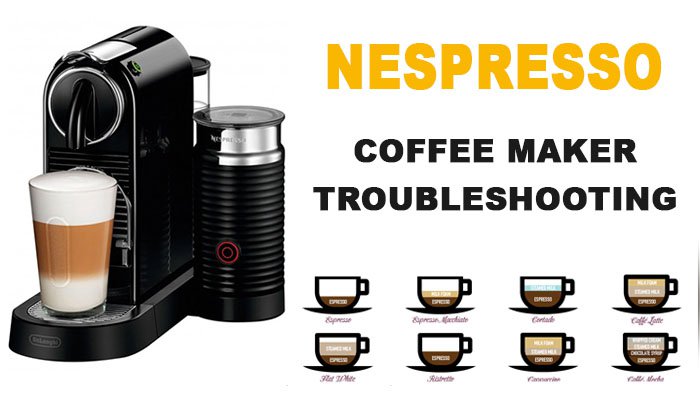 The coffee maker is one of the household appliances that are very often replaced even in case of a minor issue. Don’t you want to try troubleshooting the machine? There is every possibility that a simple 15-minute repair will save you the money and the hassle of buying a new coffee maker.

All you need know when lattissima touch descaling light flashing is reliable advice on Nespresso coffee maker troubleshooting. This is what the tables below were made for: they explain how to fix the machine without someone’s help.

If you see nespresso lights flashing 3 times it may indicate that descaling mode was activated. To stop the descaling mode, press and hold 3 buttons for 6 seconds until you hear a beeping sound.

The tank is not closing properly, so your Nespresso Vertuoline won’t pump water. Take off the tank and clear the rim from debris, if any. Before putting the tack back in its place, press on the valve and see if it lets water through. Use a towel. Get some water into the indent on the base, where the tank’s valve sits when it is not removed. Start the pump and see if the small amount of water gets sucked in. If it does, stop the pump and put the tank back Restart the pump. Now there is enough water in the system to unblock the channel and ensure suction

LED 1 and LED 6 blink alternately at 2 blinks per second:

Nespresso vertuoline no water coming out

Most likely, there is some kind of blockage in your Nespresso vertuoline, so there is no water coming out. That may be a bubble of air blocking the flow of water between the tank and the pump’s inlet. You need to create pressure and actually “pump it out”of the water path. Remove the tank and pour some water in the small valve hole in the base. Use an eyedropper if necessary. Run the pump and look at the water. If it is sucked down, stop the unit and put the tank back in its place. Switch on the pump.

If your Nespresso is not exiting the descaling mode, take steps to exit it manually.

Check the socket, into which the machine is plugged and make sure it is grounded. Disconnect and reconnect it, if it is. If your Nespresso machine still has no power, check the circuit breaker on your machine’s electrical circuit. Be sure that the circuit is not broken.

Most likely, your Nespresso Vertuoline machine is not brewing because limescale has built up on the machine’s components. You should try cleaning them.

How to descale the machine

To exit the descale mode, do the entry steps in the reverse order.

Nespresso machine not turning on

Most likely, there is a leak in the system. If your Nespresso machine is not turning on, there might have been a short in the system, because water might have gotten onto some electric components. Please, be sure that all parts are dry. Find the leak and replace the damaged hose. Take steps to dry the components, which have been exposed to water. If you have checked the system for leaks and haven’t found one, unplug the machine and check the fuses on the power supply. Test the machine. If the fuse gets blown shortly after replacement, you need to replace the PCB.